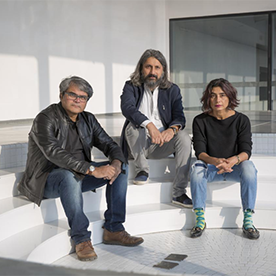 Raqs have exhibited widely, including at Documenta, and the Venice, Istanbul, Taipei, Liverpool, Shanghai, Sydney and São Paulo Biennales. They have had solo shows in museums and educational and independent art spaces, in Boston, Brussels, Madrid, Delhi, Shanghai, London, New York and Toronto, etc. Works by Raqs are included in several contemporary art collections and museums, and their essays have been published in numerous anthologies. Raqs curated Rest of Now, Manifesta 7 (Bolzano, 2008), Sarai Reader 09 (Gurgaon, 2012-13) and INSERT2014 (Delhi, 2014). Recently, they curated the 11th Shanghai Biennale, Why Not Ask Again.

In 2000, Raqs co-founded the Sarai Initiative at the Centre for the Study of Developing Societies in Delhi, and the Sarai Reader Series, which they edited until 2013. They have been invited to teach in many institutions and self-organised initiatives. Raqs received the Multitude Art Prize in 2013.